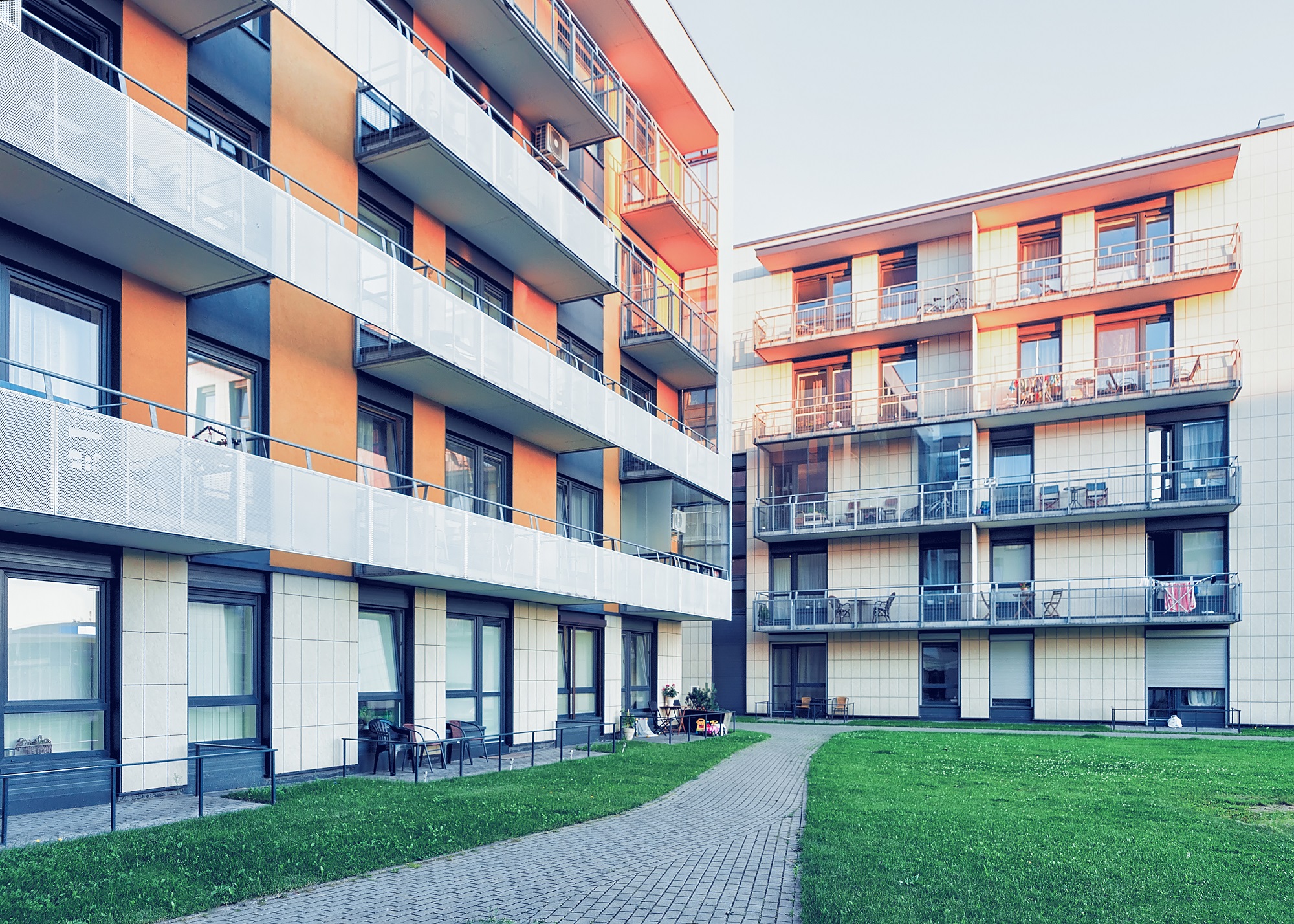 The volume of newly issued mortgages in Lithuania also remained high. Referring to the data of the Bank of Lithuania, new mortgages to the value of EUR 339 million were issued in Q3 2018; this figure is almost the same as in Q2 2018, however, it is 16% more than over the same period in 2017. In the first three quarters of 2018, the average of new mortgages issued per month was EUR 106 million, compared to EUR 98 million over the same period in 2017. Also the slight but constant growth in interest rates on newly issued mortgages recorded in Lithuania. The new average annual interest rate for mortgages in July–September 2018 was 2.32% or 0.27 percentage points more than a year ago. 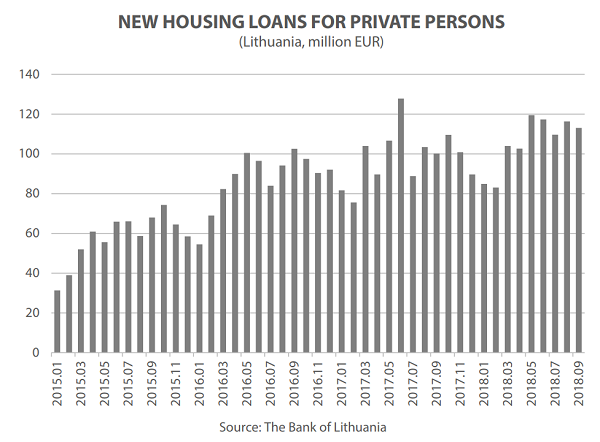 In the third quarter this year apartment prices rose in all the main cities of the country; the fastest growth was observed in smaller cities. According to Ober-Haus data, the prices increased most in July, August and September in Panevėžys, where prices for apartments increased by 4.4% on average. The prices in Šiauliai over the same period grew by 2.4%, by 1.2% – in Vilnius, by 1.1% – in Kaunas, and by 0.6% – Klaipėda. Over a period of one year (September 2018 compared to September 2017), apartment prices grew by 11.4% – in Panevėžys, by 6.4% – in Šiauliai, by 4.1% – in Kaunas, by 2.6% – Klaipėda, and by 2.3% – in Vilnius. ‘Favourable economic situation and borrowing conditions create conditions for expansion of housing purchasers who continue to stimulate the capital city market as well as the housing markets of other regions. At the same, this is reflected in changes in housing prices,’ Raimondas Reginis, Ober-Haus market research manager for the Baltics, said.

The apartment rental market in the main cities remains active and rental prices have increased in line with sales prices. According to Ober-Haus data, in the period from January to September 2018, apartment rents increased on average by 3% – in Vilnius, 5% – in Kaunas, and 7% – in Klaipėda compared to the same period in 2017.

Sales of new construction apartments in Q3 2018 in the primary market were quite high in all three main cities of Lithuania. Referring to Ober-Haus data, over Q3 2018 in Vilnius, 1,195 newly constructed apartments were directly purchased or reserved in already constructed or being constructed multi-apartment buildings. This is 34% more than the number of apartments sold over Q2 2018 or even 48% more than in Q3 2017 (the number of apartments sold over three quarters of 2018 increased by 3% compared to the same period last year). At the same time, this is the best quarter result in ten years.

The main reasons for the high activity are the continued growth in the volume of new apartments being constructed and the remaining high demand for new housing. According to Ober-Haus data, over the three quarters of this year, developers in Vilnius have already built over 3,500 apartments in multi-apartment buildings. The total estimated number of apartments to be built in 2018 in the city amounts to 4,700 (the highest number since 2008). In 2017, Vilnius developers built 4,164 apartments. ‘In view of the high demand for new housing, developers are not slowing down and plan new projects for the years 2019–2020,’ Mr Reginis said. 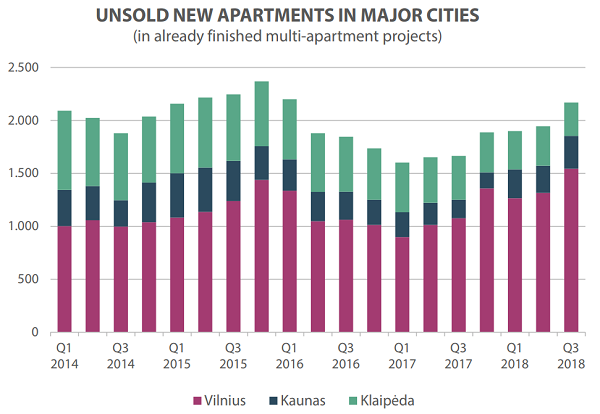 Over the last few years, Kaunas has seen rapid construction of new multiapartment buildings, which, in turn, stimulates the rate of housing acquisition. According to Ober-Haus calculations, in Q3 2018, 191 newly constructed apartments were purchased or reserved directly from developers in already constructed or being constructed multi-apartment buildings. This is 10% more than in Q2 2018 and 19% more than in Q3 2017 (in three quarters of 2018, the number of apartments sold was 1% less compared to the same period last year). In the first three quarters of this year alone, Kaunas has built over 850 apartments, whereas, for instance, in 2017, the number was 633.

‘However, apartments in Kaunas already are being built both for sale and to rent. In September this year, Kaunas saw the official opening of a student-oriented project Solo Society, which involved the reconstruction of an old administrative building,’ Mr Reginis said. This project offers 150 premises of various size (from 14 to 47 m²) for rent; the premises are of interest both to local Kaunas residents and to foreigners studying in Kaunas. In 2019, there are plans to expand this project by offering about 100 more premises of the same type.

Further positive prospects for the development of new apartments in Klaipėda

According to Ober-Haus data, over Q3 2018 in Klaipėda, 101 newly constructed apartments were purchased or reserved in already built or being built multi-apartment buildings. This is 29% greater than in Q2 2018 and 3% more than in Q3 2017 (over three quarters of 2018, the number of apartments sold compared to the same period last year decreased by 16%). ‘The relatively modest number of apartments sold (compared not only to the figures in Vilnius but to those in Kaunas also) has been determined by the smaller number of new apartments being constructed,’ Mr Reginis said. Over the first three quarters of this year, developers in Klaipėda have built almost 170 flats in multi-apartment buildings, and in 2018, it is estimated that the final figure for new apartments will be 400–450. For instance, for the full year of 2017 Klaipėda‘s developers built and offered for sale 186 apartments.

‘Increasingly courageous steps of developers allow to assume further moderate growth in the supply of new housing in the port city, however, it is unlikely to see any significant jump in the supply in the immediate future as it was recorded in Kaunas in 2017–2018. Nevertheless, it is safe to assume that the supply of new apartments will increase,’ Mr Reginis said. The housing market in Klaipėda continues to be one of the most intensive among all the big cities of the country (according to the number of apartment transactions per 1,000 city dwellers); meanwhile, the number of unsold flats in the city continues to shrink. According to Ober-Haus data, at the end of Q3 2018, the total number of unsold newly constructed apartments in already built multiapartment buildings was 316 or almost 24% less than a year ago.

Analysis of unsold apartments in already built multi-apartment buildings has shown that the majority of them (71%) include apartments which were built before 2015. Hence, developers who are currently constructing new housing in Klaipėda actually cause smaller competition than shown by the overall market figures. ‘In many cases, it is not easy to attract a modern-day buyers and to persuade them to buy an apartment in projects which were built earlier even at a lower price. Modern newly constructed projects offer purchasers more energy-efficient and rationally arranged housing in projects with a more attractive concept. The growing capacity of purchasers should encourage housing developers to look ahead and compete with existing projects, and not with projects of the previous decade,’ Mr Reginis said.