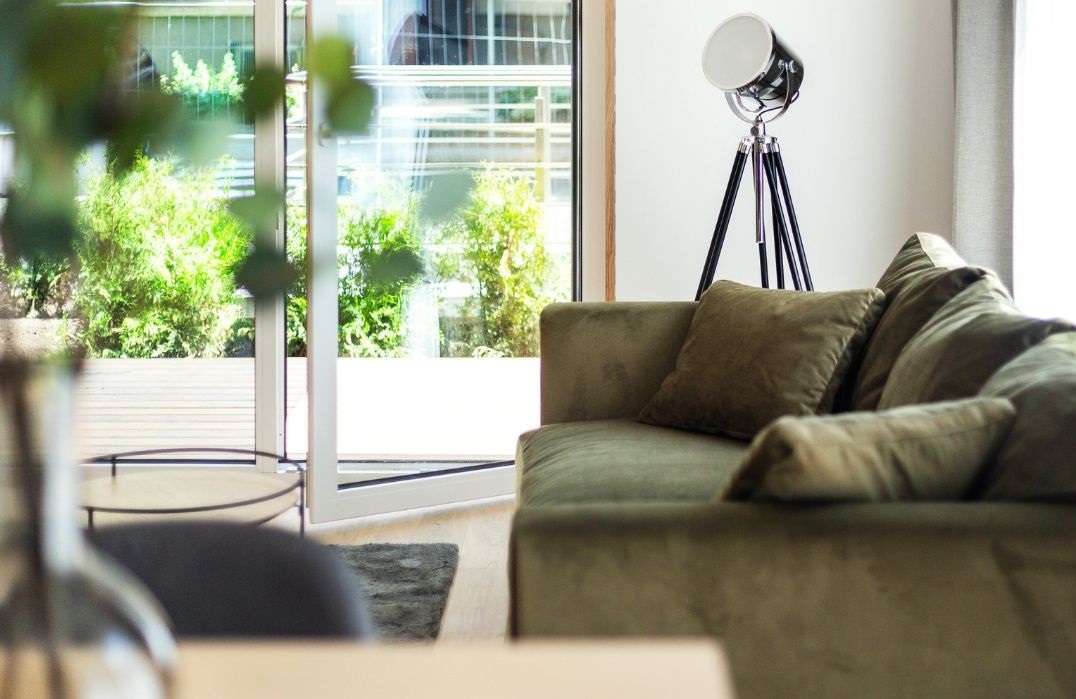 The Lithuanian residential property market, growing for the ninth year in a row, is showing no surprises this year – the general market indicators demonstrate as always that the housing market has been experiencing its heyday over the last decade. The first six months of 2019 were especially productive – compared to the same period in previous years, the number of purchased housing (apartments and houses) was the highest the country had seen since 2007. “Positive trends were recorded in all of the five major cities: the number of purchased apartments and houses was bigger than in the first half-year of 2018, and the total amount spent on such properties was also greater than a year ago,” Raimondas Reginis, Research Manager for the Baltics at Ober-Haus, said.

The total amount of money being spent on housing purchase across the country continues to increase. According to the data of the SE Centre of Registers, over EUR 1.07 billion was spent on housing (flats and houses) in Lithuania during the first half-year of 2019, or 10.2% more than the same period last year. In 2019, an increase in the amount of money in the housing market was observed, in principle, on the scale of the entire country, i.e. compared to the same period in 2018, growth was recorded in 51 out of Lithuania’s 60 municipalities.

“The fastest growth in the money being spent on housing in 2019 in terms of the main cities in Lithuania was recorded in the smaller cities,” – Mr. Reginis noted. The biggest change this year was recorded in Panevėžys. There, almost EUR 22 million was spent on acquiring housing in the first six months of the year, which is 24.6% more than the same period in 2018. Šiauliai recorded growth of 17.4% (amounting to almost EUR 32 million), Klaipėda 14.1% (almost EUR 88 million), and Kaunas 8.9% (over EUR 139 million), while in Vilnius 5.1% more was spent on housing than in 2018, totalling almost EUR 504 million.

Apartment prices increased faster in smaller cities of the country

In 2019, trends of faster growth in the sales price of apartments were also observed in smaller cities across the country. According to the data of Ober-Haus, over the first half of 2019 prices of flats in Panevėžys increased by 6.9% on average, in Šiauliai 5.7%, Kaunas 3.0%, and Vilnius 2.8%, while in Klaipėda flat prices increased the least, by 2.1%. Whereas steady growth in the sales prices of apartments continued to be recorded in Lithuania’s biggest cities, the segment of houses did not record any major changes. In the first six months of 2019, sales prices of houses in Kaunas, Šiauliai and Panevėžys and their surroundings increased by 1-2% on average. No changes were recorded in Vilnius and Klaipėda and their surroundings over the same period. 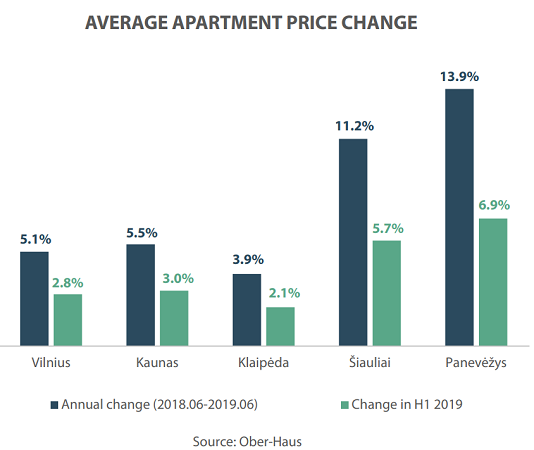 Rents of apartments in Lithuania’s three main cities grew in 2019 at a pace similar to their sales prices, a fact which demonstrates that the demand for the housing offered for rental remains on a very high level. “Traditionally, potential tenants are mostly interested in the segment of cheaper housing, which is in greatest demand among residents who earn lower or average incomes and among people who arrive to work temporarily or to study,” Mr Reginis said.

As the biggest scope for the construction of housing in 2018-2019 was recorded in Vilnius, Kaunas and Klaipėda in terms of the recent decade, and the general economic situation in the country as well as the financial situation of purchasers continues to maintain the activity of the market, growth in the volumes of sales of not only already registered but also of pre-constructed apartments and houses is being recorded. “The expanding opportunities in the choice of new housing encourage customers to buy new housing and increasingly encouraging results have been recorded in this segment,” Mr Reginis said. 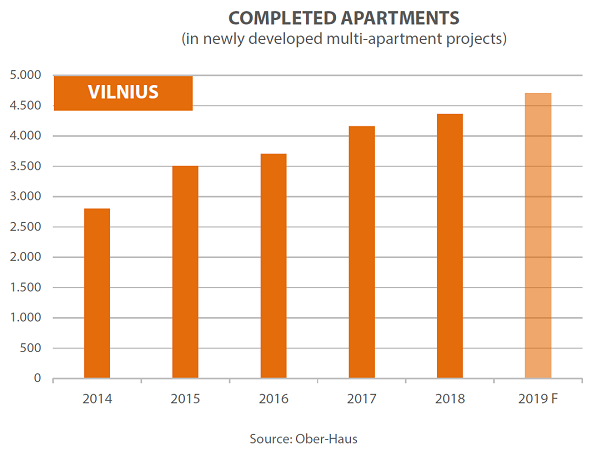 According to the data of Ober-Haus, in the first half of 2019, 2,890 new apartments in multi-apartment buildings that have been completed or are being constructed were purchased or reserved in Vilnius directly from developers. This is almost 25% more than the number of flats sold or reserved in the second half of 2018 and 55% more than in the first half of 2018. At the same time, the results of this year’s first six months are the best for a decade.

With such a high demand for new and modern housing, developers have no wish to reduce their development plans in the capital city and, in fact, estimate that in 2019 the construction of 4,600 to 4,800 apartments in multi-apartment buildings will be completed. This would be 5-10% more than were built in 2018 and the highest number since 2008.

The developers of private houses also plans a high output. According to the data of Ober-Haus, in 2019, it is planned to build about 700 houses in the city of Vilnius and its surroundings. “Although this would be about 10% less than in 2018, it would be one of the biggest annual indicators of supply in the entire history of the Lithuanian real estate market,” Mr. Reginis noted.

Regardless of the growing competition among apartment housing developers in Vilnius, where increasing numbers of apartments and houses are being built for sale, the number of unsold apartments in already constructed multi-apartment buildings has in principle remained stable and within the limits of 1,000 to 1,400 for eight years in a row. According to the data of Ober-Haus,, the number of such apartments in Vilnius in mid-2019 was about 1,050.

The number of unsold flats and the change in this number in already completed projects is one of the most important indictors when assessing the balance between supply and demand in the primary market. Too high a number of unsold flats in a specific project might indicate that the wrong sales strategy was chosen (sale prices, marketing, and etc.), which prevented the implementation of targeted goals.

Numerous constructions of new multi-apartment buildings in Kaunas in 2017 – 2019 determined record numbers of sales of new apartments during the period. According to the data of Ober-Haus, in the first half of 2019, 497 new apartments in multi-apartment buildings that have been completed or are being constructed were purchased or reserved in Kaunas directly from developers. This is almost 37% more than the number of apartments sold in the second half of 2018 and 34% more than in the first half of 2018. Just like in the capital city, the result of this year’s first six months is the best over the last decade. 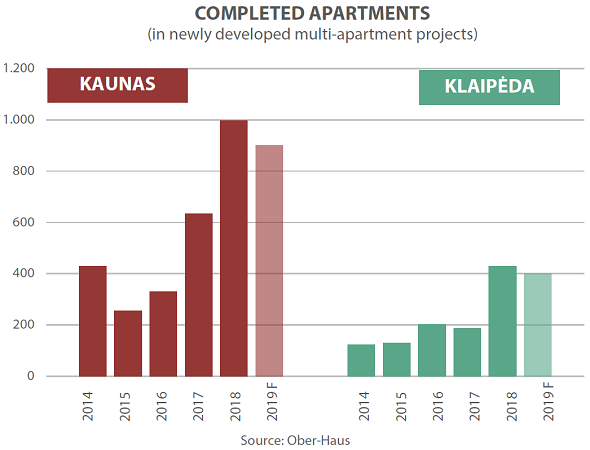 Whereas almost 1,000 apartments were built in multi-apartment buildings in Kaunas for sale in 2018, this year the number of apartments is not going to be much smaller (about 900). “For this reason, Kaunas city dwellers can be delighted with the really wide choice of new housing in recent years, which is reflected in the statistical data of early and final transactions,” Mr Reginis said.

After a longer break, Klaipėda could also boast of greater apartment development volumes in 2018. A total of 11 projects offering 429 apartments were implemented in Klaipėda in 2018. This is 2.3 times as many as in 2017. In 2011–2017, only about 200 new apartments per year were built in Klaipėda on average.

Following a longer break, some life is being breathed into the city of Klaipėda, where almost 430 apartments were built and offered for sale in 2018. This year, developers plan to complete 400 more new flats in multi-apartment buildings. After the implementation of these projects, 2018 and 2019 will have been twice as rapid in terms of the development of multi-apartment buildings in Klaipėda than in the period from 2011 to 2017, when only 200 or so new apartments were built there per year on average.

The greater volumes of new housing developments are also being reflected in the statistical data of apartment sales. According to Ober-Haus, in the first half of 2019, 287 new apartments in multi-apartment buildings that have been completed or are being constructed were purchased or reserved in Klaipėda directly from developers. This is almost 30% more than the number of apartments sold in the second half of 2018 and 76% more than in the first half of 2018

Differently from the situation in the capital city, where the number of unsold apartments in already built multi-apartment buildings has remained within a similar range for eight years in a row, trends in Kaunas and Klaipėda are different. Analysis over a longer period shows that the number of unsold units in already built multi-apartment buildings in Kaunas and Klaipėda is gradually reducing. 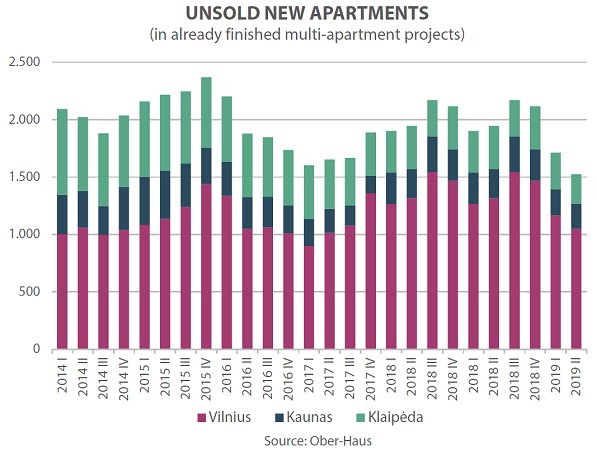 “In other words, differently from the capital city, the market in the aforementioned two cities has focused on the sale of previously built vacant units and not on the development of new projects,” Mr Reginis said. In the last two or three years, the scope of new housing construction recorded in Kaunas and Klaipėda should stabilise the declining number of unsold apartments in already built multi-apartment buildings and in this way retain a balance between supply and demand.