Home / News / In the face of the pandemic, one of the largest investments in the development of modern warehouses

In the face of the pandemic, one of the largest investments in the development of modern warehouses 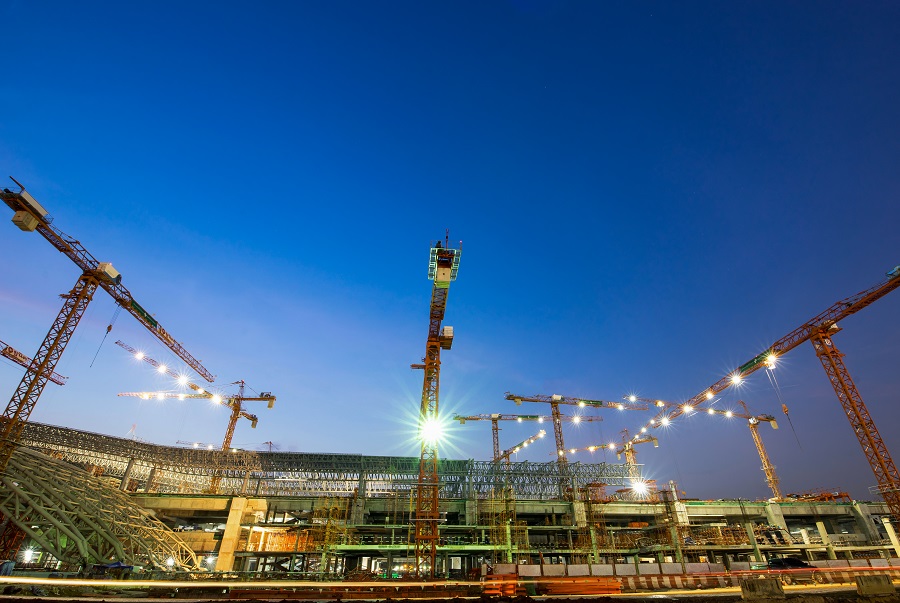 After record-high results of the warehousing and transportation companies in 2019 in Lithuania, a decline was recorded in Q2 and Q3 2020. According to Statistics Lithuania, sales revenues (excluding VAT) of the companies related to transportation services in Lithuania in the first nine months of 2020 totalled EUR 3.3 billion or 0.9% more than in the same period in 2019. However, looking only at the changes in the sales revenues of warehousing and storage companies during the same period, a decrease of 15.9% was recorded in 2020.

“If the official statistics shows a sufficiently significant decrease in the sales revenues of warehousing and storage companies this year, investments in the construction of new warehouses have been considerable” Raimondas Reginis, Research Manager for the Baltics at Ober-Haus, said.

150,000 sqm of new warehouse space in the main regions of the country

In the first three quarters of 2020, in Vilnius, Kaunas and Klaipėda regions, 12 projects (or their stages) were completed offering nearly 150,000 sqm of warehousing space. According to Ober-Haus, this is 57% more in these regions than in 2019. Klaipėda region stood out with the largest area of newly constructed warehousing premises in the history of the region.

After completion of the construction of another warehouse in Vilnius at the end of this year, the total area of warehouse space built in 2020 in Vilnius, Kaunas and Klaipėda will reach almost 154,000 sqm and will be one of the highest figures in the supply in history. “A higher figure was achieved in 2008, when 18 projects (or their stages) were completed in these regions with nearly 170,000 sqm of new warehouse space,” Reginis added. 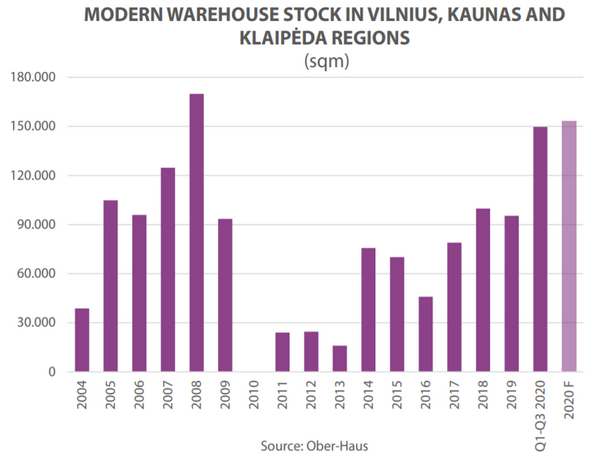 “It should be noted that the new warehouse space in 2020 did not fill the market with vacant premises. A total of 75% of the new premises were built for own use, including the third-party logistics services (3PL) and the rest of the premises were either directly offered for rent or had been leased before the construction was started,” Reginis said.

In the first three quarters of 2020, five new projects were completed in Vilnius and its environs offering 49,300 sqm of warehousing premises.

The logistics services company, Transekspedicija, completed a large-scale project by implementing the third stage of its development on Ukmergės Road. This stage of development involved the construction of 25,000 sqm logistics centre with offices. Another major project was implemented in Kirtimai district, where 14,000 sqm sized logistics centre of the Lithuanian Post were completed. The centre will accommodate an automated line for distribution of parcels and correspondence.

Meanwhile, in Q3 the Norwegian capital real estate developer, Baltic Sea Properties, completed two warehouses next to Vilnius-Kaunas Motorway, which were leased to the pharmaceutical logistics company Oribalt Vilnius and the international freight company Delamode Baltics. JUNG Vilnius built a new 3,000 sqm commercial building on the old Ukmergės Road for own use. In addition to the administrative and other premises, it contains a 2,000 sqm warehousing area for the company’s production.

According to Ober-Haus, after the implementation of these projects, the total area of warehouses in Vilnius and its environs increased by 8% to 671,800 sqm in Q1-Q3 2020.

By the end of 2020 in Žemieji Paneriai district of Vilnius, a 3,600 sqm warehouse of Vilpak, producer of packaging, should be completed for its own use. The real estate development company, Sirin Development, is planning to implement the fourth stage of Liepkalnis Industrial Park in 2021 (over 25,000 sqm warehouse). In the meantime, the fund management company, Eika Asset Management, is planning to build a 4,700 sqm express parcel terminal that will be leased to DHL Lietuva in the territory of Vilnius Airport in 2022.

In addition to the development of traditional warehouses, developers are keen on launching the development of stock-office concept buildings. The real estate development company, Darnu Group, has announced further development of Vilnius Business Park on Ukmergės Street. The development will involve the construction of 24,000 sqm sized commercial complex that will offer tenants a variety of premises (offices, retail, storage and production) in one place. A few other companies are planning similar larger scale projects in different parts of Vilnius.

Developers of traditional and larger warehousing projects usually face the challenge of finding major tenants, therefore such projects start only where at least some of the tenants have been found. “In contrast, projects offering smaller floor area and multiple use in one place can attract a much wider range of potential tenants, thus allowing for more flexibility in planning such projects. In the context of rapidly growing e-commerce, demand for and supply of such projects should grow steadily as projects of this type that are closer to urban areas can improve the delivery of goods to end users,” Reginis said.

In the first three quarters of 2020, two new projects (or their stages) were completed in Kaunas and its environs with 14,200 sqm of new warehouse space in total.

Hegelmann Transporte completed the third extension of it’s logistics centre with of around 10,000 sqm in Kaunas District and a 5,000 sqm warehouse with offices in Petrašiūnai district, on Chemijos Street.

According to Ober-Haus, following the implementation of these projects, the total area of warehouses in Kaunas and its environs increased by 3% to 426,900 sqm in three quarters of 2020.

At the beginning of 2021, the Vičiūnai Group should complete nearly 12,000 sqm logistics centre in Kaunas FEZ. Another major project in Kaunas region is being implemented by the real estate development company, Sirin Development. In mid-2021, the company plans to complete the construction of the second warehouse for Kaunas Logistics Centre (total area of about 16,000 sqm). The first 24,000 sqm warehouse with offices was completed in 2019.

Total area of modern warehousing premises increased by 41% in Klaipėda

The year 2020 was exceptional for Klaipėda region as it saw the development of two largest warehouses in this region.

Vlantana, a transport and logistics company, expanded its storage complex next to Vilnius-Klaipėda Motorway by building another 32,000 sqm logistics centre.

In the meantime, the real estate development company, Urban Inventors, implemented an equally impressive project next to Vlantana’s warehouse. It completed the first stage of the SBA Technology and Innovation Park by building a 30,000 sqm logistics centre to be used by SBA and other companies.

According to Ober-Haus, completion of these projects increased the total area of warehouses in Klaipėda and its environs by 41% up to 296,500 sqm in Q1-Q3 2020.

The supply of warehousing space in Klaipėda region will increase in 2021 and subsequent years as further development of the Baltic Logistics Centre and SBA Technology and Innovation Park are planned, Vingės Logistika plans to expand the area of its warehouses in Klaipėda FEZ, etc.

“However, the specific deadlines for implementing new projects will still depend both on the situation in the transport and logistics sector and the opportunities in the real estate market, particularly as far as the development of projects for rent is concerned, because traditional bank financing without advance arrangements with tenants is almost impossible,” Reginis said.

COVID-19 pandemic and the new supply has kept rents flat

Rents for new warehouses remained stable in Vilnius, Kaunas and Klaipėda regions in 2020, while rents for old warehouses increased by 2-3% on average.

“The market of modern warehouses is regularly supplemented with new projects. In 2020, however, due to the uncertainty of the pandemic, tenants were particularly concerned with the costs of renting premises. The increase in rents of old warehouses is more attributed to a relatively low rent level which continues to increase within the limits of the inflation rate,” Reginis said.

The prevailing strong domestic consumption and sufficient supply of warehousing space should keep rents stable in the short term. One of the more significant changes taking place is the gradual implementation of the provisions of the EU Mobility Package, which may have a significant impact on both the Lithuanian transport sector and the country’s overall economy. The development of the warehouses to a large extent depends on the operations of transport and logistics companies, which, having assessed the impact of the changes in practice, may in the future reduce investment not only in vehicle fleets, but also in this real estate segment.

On the other hand, warehouses, the more active development of which started in Lithuania 15 years ago, do not always meet the needs of today’s tenants. “For operational efficiency many tenants tend to renew storage facilities looking for more convenient transport or more modern building engineering infrastructure, a bigger height of the premises, etc. The rapid growth of e-commerce brings a demand for efficient and rapid delivery of goods to end users, which may lead to a more active development of compact and multifunctional projects located closer to consumers,” Reginis said.

According to Statistics Lithuania, the retail sale via mail order houses or via Internet in Lithuania in 2015–2019 grew on average by 28% annually. Meanwhile during the first nine months of 2020, a 44% growth compared to the same period of 2019 was recorded.